I think that with the development of the theatre its clear that the Srebrenican children aren’t burdened by war memories and are inspired to do new things so the children create a new situation … quote from a young person who is a member of Srebrenica Children’s Music Theatre, taken from the 2012 film Candles in the Night[13] 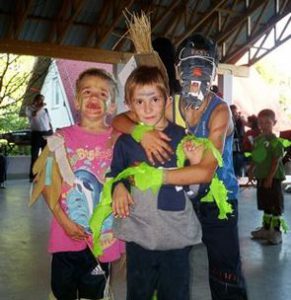 Professor Nigel Osbourne, an acclaimed British composer, who got to know Bosnia as a young man returned repeatedly to Sarajevo while it was under siege during the Bosnian War to work with musician friends and bring music to children suffering from the trauma of the continual bombardment and death. These informal workshops evolved into the establishment of the Pavarotti Music Centre[1] in Mostar with the NGO War Child that offered a range of music therapy and therapeutic music activities to treat the effects of trauma in children.

Through this work in BiH, Nigel Osbourne has spearheaded work with music therapy in post conflict settings working closely with scientists to evaluate and measure its impact alleviating the physiological effects of trauma on children. He emphasises that peer-reviewed scientific trauma research now clearly demonstrates that music therapy can help with the symptoms of trauma rather than heal it completely[2]. His ongoing work with communities affected by conflict uses music not only as a form of therapy but also as a tool for social change with communities composing their own songs as a means to getting their voices heard. His work in Bosnia and Croatia continues with summer music camps documented in the film, A Gift of Culture[3], by film maker Robert Golden who has extensively documented the work of Nigel Osbourne and Tina Ellen Lee and Opera Circus UK.

Nigel Osbourne collaborated with Opera Circus UK[4], a performing arts company headed by Tina Ellen Lee, to write the music for an opera, Differences in Demolition[5], (text was written by the Bosnian poet, Goran Simic). In 2007 this production toured throughout Bosnia and Opera Circus were invited to Srebrenica to meet a group of young people who had set up Srebrenica Children’s Music Theatre, leading workshops and creating performances with and for children in the town. Srebrenica Children’s Music Theatre is made up of Serb, Croat and Bosniak young people working together to make music and theatre[6]. They wanted more training in dance, drama and music and they wanted good news to come out of Srebrenica.

This led to an ongoing relationship with Opera Circus UK responding to their evident desire to use artistic and cultural practice to create opportunities for young people in their town.  Various different projects and initiatives have taken place over the years. These include performance programmes and youth and school exchanges between Srebrenica and the UK, youth centre job sharing programmes, dance courses, festivals, support for University and college scholarships and mentoring.  Ongoing workshops include Parkour, Forum Theatre, the uses of Music for those with physical or emotional concerns and live performance[7]. Currently their work is mainly focused on The Complete Freedom of Truth[8], an international youth-led project aimed at building global youth citizenship through arts and culture and the Four Towns Youth Initiative which brings together young people from four towns in BiH.

Robert Golden’s film, Candles in the Night, shot between 2009-11 documents the young people’s efforts to overcome the horror of the past and the divisions of the present in their community. The whole film has not been broadcast as it is still considered too dangerous for the young people however this extract was edited for DAVOS in 2012 and presented by Professor Nigel Osborne, as part of a seminar on Music for Social Change[9].

Tina Ellen Lee has contributed to various seminar and forums on arts, culture and conflict[10] (Seidl-Fox 2014, Salzburg Global Seminar 2014) and stresses there are no quick fixes to re-building people and no large scale solutions. Highlighting how local people usually feel offended and estranged by foreign experts who arrive with ready solutions, she advocates for continuous engagement on the ground and consistent work to build and sustain safe creative spaces that encourage the sharing ideas and concerns over time[11]. She has been working with Unicef and Bournemouth University to develop evaluation and research[12].

The work of Nigel Osbourne and Tina Ellen Lee with Opera Circus UK are considered together because of their shared focus of working with young people, music and theatre in Bosnia and also because together the overlaps and collaborations in their work illustrate an important element of the collaborative and emergent qualities of artistic initiatives.   The long term, interlinked evolution of their work demonstrates how artistic projects grow out of and engender collaboration between different groups and individuals (artists, community groups and institutions) and can evolve and adapt in response to what is happening on the ground. Artists who work with a long-term commitment to a specific country or region often build complex networks and spheres of knowledge founded on collaborative endeavour that builds the capacity of local actors.

[2] See Prof Nigel Osbourne’s 2013 lecture, Worlds in Collision: Music and the Trauma of War at The Musical Brain conference: https://www.youtube.com/watch?v=OUBsROQVJo4

[6] The Children’s Theatre have kept a blog here: http://musicbussrebrenica.blogspot.com.ar/

[7] For a summary of Opera Circus UK’s activities see: http://www.operacircusuk.com/bosnia-and-herzegovina—children-and-young-people—arts-and-culture.html

[11] Tina Ellen Lee was interviewed for this research, April 2017