Reconciliations: The Evidence of the Visible is one of an ongoing series of exhibitions of art work produced in response to a call to artists to investigate the concept and practice of reconciliation, specifically, in this case, in relation to the Siege of Sarajevo and the Srebrenica massacre of July 1995. This exhibition explores how visual evidence of past crimes can play a role in post conflict remembrance, reconciliation and rebuilding. A fundamental question for art is how it should relate to and engage with the broader social, political and economic climate of the times, and how far the artist should concern themselves with the world they inhabit. These questions are particularly troubling in those parts of the world that have endured the scars of war, where artists and arts organisations have to deal with the complex and problematic issue of whether the past should be remembered and commemorated, or whether such attention is actually counterproductive in imagining how in the future further conflicts might be prevented. 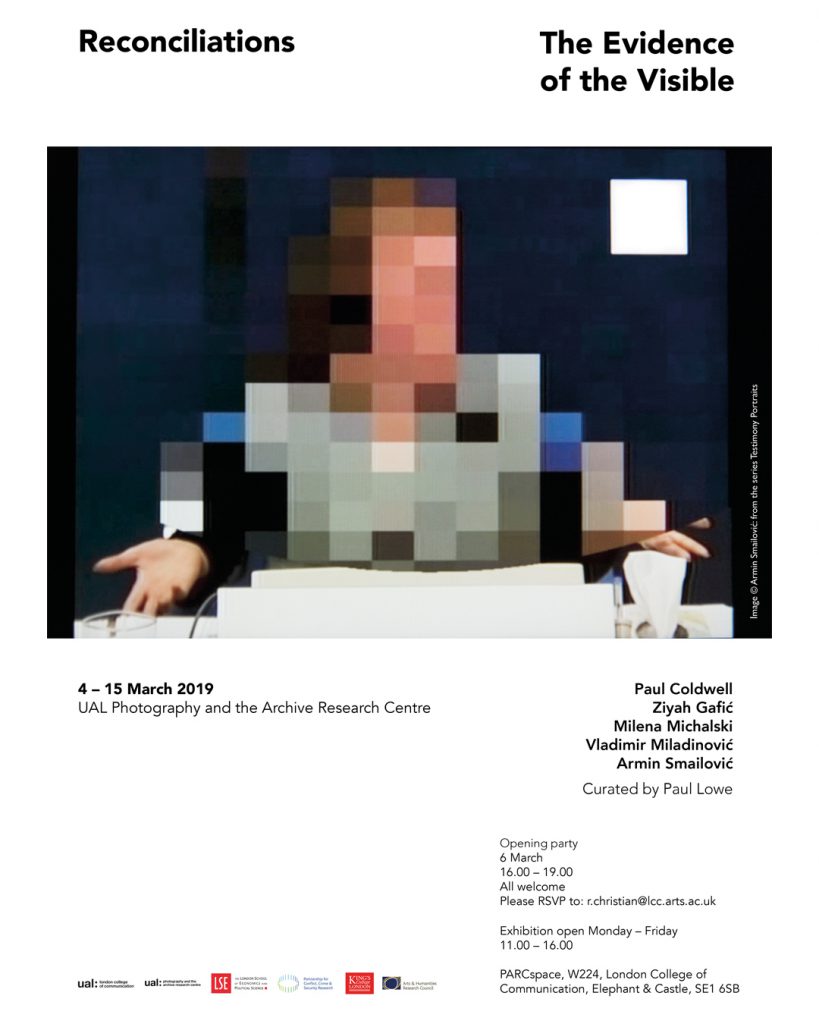 Reconciliations: The Evidence of the Visible forms part of a larger research project, Art and Reconciliation: Conflict, Culture and Community, funded by the UK Arts and Humanities Research Council under its Partnership for Conflict, Crime and Security Research programme and the Global Challenges Research Fund. The project was an interdisciplinary collaboration between King’s College London (James Gow, Rachel Kerr and Milena Michalski, War Studies), the London School of Economics (Denisa Kostovicova, Government) and the University of the Arts London (Paul Lowe, London College of Communication and Paul Coldwell, Chelsea College of Art). We are grateful to the AHRC for taking a leap of faith in funding such an ambitious project, and to all those individuals involved, including the fantastic project staff, Tiffany Fairey, Henry Redwood, Jelena Petrović, Ivor Sokolic, Tom Paskhalis and Ari Salazar Volkmann, and representatives of partner organisations, including Ivan Zverzhanovski (UNDP), Velma Šarić, Leslie Woodward and Tatjiana Milovanović (Post-Conflict Research Centre, Sarajevo), and, especially in this context, the wonderful Elma Hasimbegović and Elma Hodžić from the History Museum of Bosnia and Hercegovina, who managed the open call to artists.