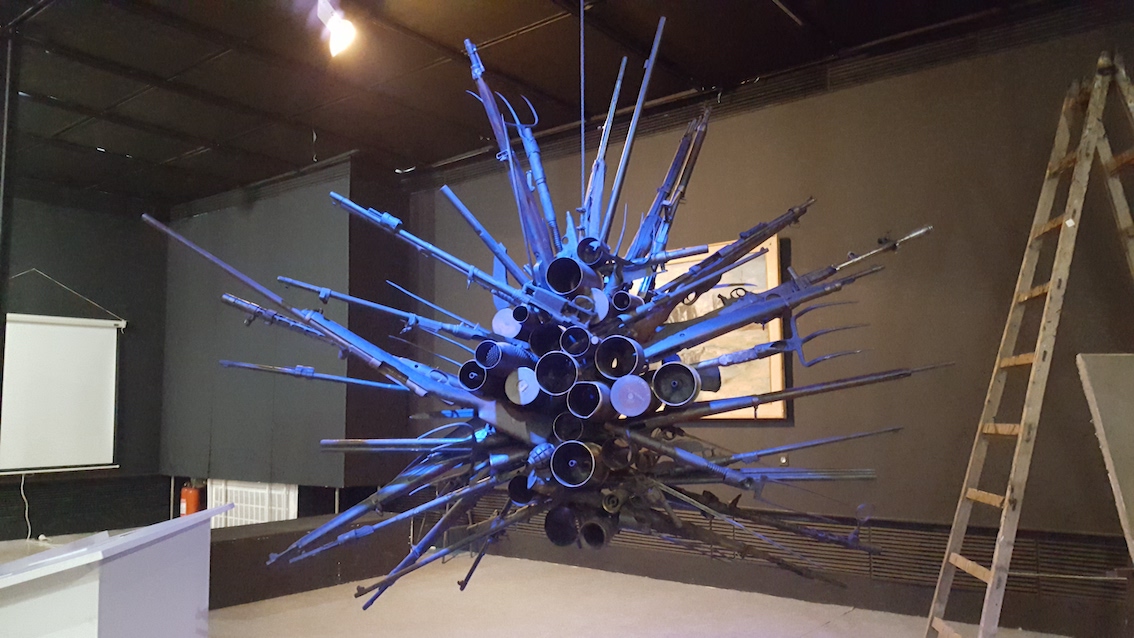 The ‘Living Museum’ is a collaborative project between the Historical Museum of Bosnia and Hercegovina, King’s College London and the University of the Arts London, funded by the UK’s Arts and Humanities Research Council and Global Challenges Research Fund to follow-on from Art and Reconciliation to enhance impact and engagement.

The project aim is to create innovative ways of researching, responding to and intervening in the museum’s extensive collection of artworks from the socialist Yugoslav period. Some of these works are being exhibited in the main exhibition space of the Museum from May to August and we are inviting artists, curators and researcher to use the Museum as an open studio space in order to engage with the collection and produce new artworks and curatorial/critical interventions.

The History Museum of Bosnia and Hercegovina collects, preserves, researches, presents, and promotes the cultural and historical heritage of Bosnia and Herzegovina. The Museum was founded in 1945, and it underwent a series of transformations throughout its history. From its founding in 1945 to 1993, the Museum was focused on the history of anti-fascism in World War II, and on fostering values of the socialist state. It was known as the Museum of People’s Liberation and Museum of the Revolution.

The Art Collection followed the aims of a socialist museum – it was created to highlight the historical events and aspects of collective narrative such as the national liberation struggle, important battles and personalities, war suffering, the postwar reconstruction, and metaphors of social cohesion. For more information about the Art Collection please visit http://muzej.ba/collections-research/collections/.

After the conflict from 1992-1995 the museum was renamed the History Museum of BiH. Today, the Museum works as a platform for dialogue about the past and its relationships to the present. Underpinned by the concept of openness to society, by fostering links with the community, and offering its visitors museum items, stories and space, the museum seeks to open new perspectives in the BiH museology.

In May, we launched an open call to artists/art historians/researchers to open up the Museum’s Art Collection, and to open up the question of the Yugoslav/socialist legacy. The open call was conceived as an intervention to re-examine the role of art from the period from 1945 until 1989, and its relevance to the current situation in BiH. Participants of the ‘Living Museum’ project were invited to interact with the Museum and Art Collection in a fresh, creative way, to reveal new ways of seeing and showing both the Museum’s holdings and their own work.

Some of the collection was moved from storage in the depot to the central exhibition area, which was transformed into a cultural hub and open studio from May to August. Selected artists/art historians/researchers worked with the museum’s collections during this period, responding to the collection directly by engaging with it through a range of interventions.  The outcomes will be exhibited at the Museum during October-December 2019.

In a Different Light by Milena Michalski

AFZ permanent installation, “What has our struggle given us?”, on the Women’s Antifascist Front of Yugosalavia.

Living Museum commissions and exhibitions have featured in numerous articles in the Bosnian press: