“It is in the indistinction between the political and the aesthetic, between labor and artistic creation, between the artist and the citizen, that the politics of aesthetics shows its transformative potential.” – Artist, Carmen Elena Trigueros3 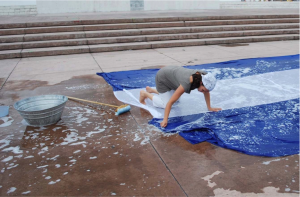 The exhibition “Re: Construcción” is a collaboration between international and local artists, collectives and community organizations, curated by the Construccion Team, The Fire Theory Studio and the Virgin Studio. The multimedia project discusses the aftermath of the Civil War in El Salvador. The exhibition integrates the experiences, reflections and impressions of El Salvadorans in both El Salvador and the United states on the ongoing violence in the country. The artists comment on contemporary ‘issues of transnational identities, intergenerational knowledge and the far-reaching social conflicts which exist in the country1’. The exposition reflects on these themes through performance dance, sculpture, photography and video-art.

Re: Construcción is split into three main parts. The first part, hosts several tables filled with numbered household objects and photographs, which are devoted to eight individuals.  The audience is guided through the exhibition by the numbers, which correlate to interviews and audio footage collected by the artists and distributed through mp3 players. Their stories can be listened to linearly or the viewer can pick and choose which object they want to listen to. The second part consists of an interactive wall, overflowing with a variety of objects, drawings and scrawled on pieces of paper. The objective of the wall is to collect ever growing samples of the thoughts of the Salvadoran community on the war, as the exhibition travels through the United States and El Salvador. The third part of the installation encompasses the creative pieces of the artists in residence1. In addition, the participants of the project engage in textile workshops to create their own clothing lines, ‘REO Clothes Collection’ – which are displayed in various locations: ranging from New York, Los Angeles to El Salvador until 20182. Along with the exhibition space, the Fire Theory Studio primarily uses social media to market its products.

The exhibition provides an important space in raising awareness on the lack of reconciliation in the country, along with creating a link in between El Salvadorans abroad and their home base. The country’s public lacks political awareness and hence there is no active pursuit for change. 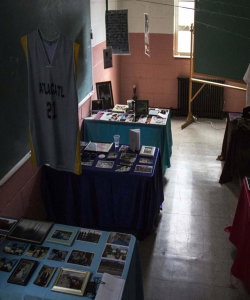 Projects such as these re-establish a link between the people and their government, and provide for a dialogue between the domestic and the national sphere. The country heavily relies economically on the influx of remittances from El Salvadorans living in the United States, and there is a growing concern that the second and third generations abroad are dissociating from their home-bound relatives and abandoning their role as bread-winners.

The ensuing disconnection is understandable, as fewer and fewer families return to El Salvador in fear of the growing gang violence. The relational point hence diminishes for the new generation, accompanied with their sense of an El Salvadoran cultural identity. Although there exists no concrete measurement of the effects of the exhibition, the process itself has been highly successful in furthering critical thinking in participants, connecting them to back their cultural roots and pushing them to demand for their political rights 2. Cultivating this sense of social and political engagement amongst El Salvador’s younger generation, both abroad and at home, is essential. Furthermore, there are few spaces in which Artists can feature their work in the country – the exhibition facilitates a professional opportunity for young artists to diversify their work and contributes to the cultural heritage of El Salvador.