This is a blog post by Professor Paul Coldwell, written about the REconciliations exhibition, History Museum of BiH, June 29th 2018

I was delighted to be invited to show in the exhibition ReConciliation , curated by Dr Paul Lowe and Elma Hasimbegovic as part of the AHRC Art & Reconciliation project. The exhibition ReConciliation provided me with a unique opportunity to show work that I made twenty years ago, before ever visiting Sarajevo, alongside new work made as a resulting of visiting in January 2018 and conducting research within the History Museum.

The earlier work had been made in response to Martin Bell’s BBC radio broadcast of April 1996 in which he signed off as BBC War Correspondent and reflected on the tragedy of the Bosnia war. I made two pieces of work; the first an artist’s book With the Melting of the Snows in which, through three visual chapters of computer manipulated photographs, I attempted to imagine the Siege of Sarajevo and make visual equivalents to Bell’s text. The second piece was a large installation of bronze objects Abandoned Landscape in which I tried to suggest objects left behind in flight, as if suddenly discarded. Whilst twenty years ago it was Bell’s broadcast that got through my defences and impelled me to respond, the new work I have made takes its key from research in Sarajevo in January as part of the Art & Reconciliation project.

I was immediately drawn to a sweater belonging to Nermin Divović a seven-year-old child who was tragically shot by a sniper 100yards from the museum. His sweater, donated by his family is displayed alongside some photographs of him playing wearing the same sweater, as part of an exhibition remembering the siege.

I have attempted to memorialise this short life, by commissioning seven duplicate sweaters, one for each year of his life, the first a tiny sweater for 0-1-year-old, through to one to fit a 6-7-year-old. I was really grateful to Anne Jones, a friend and curator at the Arts Council who helped me find a knitter. The sweaters were eventually hand knitted for me by Carol McDavid, a lady living in rural Wales (UK) to whom I sent drawings and photographs for her to work from. The sweaters entitled A Life Measured: Seven Sweaters for Nermin Divović are presented in a line as if recording a life which has been cut short.

Another piece, Three Bottle for Sarajevo (for Edin Numankadic) takes its origins from the importance of plastic water containers to collect water in the siege and references a joke told to me by the artist Edin Numankadic’s that a man was crossing Sniper’s Alley with plastic bottles to collect water when a sniper shot his bottles, so the water poured out. The man screamed at the sniper, ‘don’t shoot the bottles, shoot me!’ Here in the black recesses of humour, lies a sad truth that without water you would be dead anyway.

For me it is very poignant to show all these works in the context of Sarajevo and the Museum and its collection. My piece A Life Measured: Seven Sweaters for Nermin Divović is shown alongside the original sweater and sets up a dialogue between the authentic object and the imaginative space in which art functions. Furthermore, a hundred yards from the museum is a memorial stone commerating Nermin’s death so in this context I hope that my memorial of woollen sweaters suggests another way of remembering. In my case it is remembering through the actions of knitting with their associations with love, warmth and nurture.

There are always surprises when showing work. One that I appreciated was how, when viewing Abandoned Landscape on the floor in the gallery, the viewer can glimpse through the windows to see the remains of WW1 I tanks in the garden of the museum which seem to add a degree of menace to my everyday discarded objects such as bottles, children’s toys and picture frames that make up my installation

In terms of reconciliation, I believe that art has a powerful role to play in presenting images onto which ideas and feeling can be attached. Art is vital in supporting empathy, the capacity to see another’s point of view and without empathy, I believe reconciliation is probably impossible. Art provides a portal through which to view the world and as an overall exhibition I think it certainly offers that to the viewer. Reconciliation is a process and my hope is that in some small way, my work and that of my fellow contributors will provide means to help think about the immediate past and make a small contribution as to how we might imagine the future.

This is a blog post by Professor Paul Coldwell, written about the drawing workshop held in Sarajevo, Jan 2018

In 1996 on 4th April, I heard a radio broadcast from Martin Bell, signing off as the BBC war correspondent and reflecting on the tragedy of the war in Bosnia. This, along with the daily news reports of the war, touched me in ways I hadn’t expected. Over the next year, in my studio in London I made an installation of some 15-16 bronze objects Abandoned Landscape and an artists’ book With the Melting of the Snows as a response in which I imagined the siege of Sarajevo.

Now 20 years later I have had the opportunity to visit Sarajevo for the first time and to spend time at the Museum of History as part of the Art & Reconciliation project. I was also fortunate to be guided by Dr Paul Lowe who as well as being one of the principle investigators for the project, witnessed the war first hand as a photographer and who has so movingly documented the horror of the conflict through his camera lens.

The reason for my visit was twofold; firstly, to conduct a drawing workshop with high school pupils and secondly, to carry out some research both in the Museum of History and in Sarajevo in general in order to make new work for an exhibition at the museum in June.

For the drawing project I had asked everyone to bring a shoe and with only a very brief introduction I asked them all to start drawing. There were around 15-16 teenagers and I wanted them to discover how, through drawing such an everyday object, they might be able to instill it with character and personality.

Shoes represent something which is both common and specific since through wear, the shoe takes on the shape of the owner and can therefore suggest a life lived. Over the period of three days, these drawings developed from being individual drawings, to being part of a large composite drawing measuring over 5 meters in length. Here, the shoes were accompanied by lines, as in contour maps, in order to explore the interconnectivity of things, and by implication, of people. In the end the drawing spoke of individually bound together within a common mesh. Within the scope of the project, I wanted the pupils to explore how we can both celebrate difference while also being aware of common needs. We explored these ideas through other drawings including a large scale communal drawing which began with each transferring an enlarged version of their signature, around which drawings of shoes, and other objects including those on display in the museum were added.

The only formal aspect of the workshop was a talk I gave on my work and how I have worked with museums and collections. On other days, I spent time in the museum and on the streets and in many ways the two were directly connected. Firstly, since it was really cold, and with little heating in the museum, it was just as cold inside or out. Secondly, the city still bears the scars of the conflict, both in evidence of damage still visible on certain buildings and in the manner in which deaths are marked by ‘Sarajevo Roses’, resin filled craters in the pavements like blood stains. About 50 meters from the museum as a memorial stone to Nermin Divovic a little boy aged just 7, shot dead by a sniper in the notorious ‘snipers alley. In the museum, was a small sweater that he had worn, and in which he was photographed playing in the snow. This sweater seemed to represent the futility of war and the tragedy of a life cut short. I am now in the process of commissioning replica sweaters, one for each of his seven years to be displayed in the exhibition in June. The exhibition will also be an opportunity to show the installation I had made 20 years ago, now in the place I imaged.

Visiting Sarajevo was also an opportunity to listen to stories, many conversations with the director and her staff all brought home to me the real nature of life under siege. Amongst the artists I met, was Edin Numankadic. I visited his studio in the social housing complex and in the top of the building was a treasure chest of decades of work including floors covered by surreal boxes each filled with incongruous objects. On the drive to his studio he mentioned a Bosnia joke, in which a man running had his water bottles shot by a sniper to whom he screams, ‘Don’t shot the bottles, shoot me!!!!’. The plastic water bottles, so essential for survival during the seige, become in the joke, more important than the life of the carrier. This story has informed a small triptych that I have just cast in bronze in London, in the foundry at Chelsea and which I hope to show in Sarajevo in June. 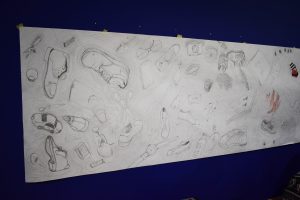 This workshop will explore the evaluation and impact strategy developed for the AHRC funded project, Art and Reconciliation, in collaboration with Kings College War Studies Department and the London School of Economics.

It will be lead by Paul Lowe and Tiffany Fairey from LCC and Professor James Gow from Kings, and will be run as a workshop to share experiences, ideas and best practices.

This session will discuss the evaluation strategy and framework that has been developed to explore the impact of these artistic commissions and to investigate how these artistic interventions are experienced by those involved and whether (and how) they do or do not contribute to reconciliation and peace-building.

More broadly, it will consider the question of how we can effectively research, evaluate and communicate the social impact of the arts. Recent decades have seen the arts increasingly harnessed to tackle issues of social exclusion, community renewal and in post-conflict societies as a means to build peace. Institutional funders are keen to see evidence of impact however traditional evaluation methods with their emphasis on quantative methods and linear, causal models of change fail to capture the emergent qualities of the arts and their transformative effects. Is there a way to navigate the clash of cultures between programmatic evaluation approaches and open-ended artistic processes?   How can we build research strategies that critically capture and communicate the contribution and qualities of artistic projects to complex and unstable social contexts?