Thank you to everyone who came to celebrate the opening of our exhibition, Reconcilations, at The Exchange, Bush House, King’s College London on 1 November 2018, and at the Knapp Gallery, Regent’s University London on 2 November 2018.

We had two wonderful evenings celebrating and discussing the work of all of the wonderful artists whose work is included in the exhibition, including Vladimir Miladinovic who managed to navigate the dreaded visa regime and come from Belgrade to help us install his beautiful series of ink drawings, Memoria Bosniaca, and Dejan Kaludjerovic, who designed a special display about his work, Marbles, for us to exhibit in London.  We look forward to being able to exhibit the whole installation in Sarajevo in Reconciliations II later this year. We also saw Mladen Miljanovic’s rocket launcher in operation watering the gardens in Regent’s Quad!

Artists whose work is exhibited at the Knapp Gallery also joined us last night for a fascinating and insightful discussion about reconciliation and the artistic process.  We heard from Lola Frost, Pam Skelton, Naresh Kaushai and Gunther Herbst and Emma Elliott about how they navigate contradictions and contestations in their work, and how the reconciliation of paradoxical and seemingly mutually exclusive positions could be managed but not, crucially, necessarily resolved.

We look forward to hosting some of the other featured artists from Bosnia and Hercegovina – Lana Cmajcanin and Adela Jusic (Bedtime Stories), Ziyah Gafic (The Rope), Mladen Miljanovic (MWRL) and Melos Gashi (The Tapes) later this month, and to hearing them discuss their work at the Symposium, together with partners from the Historical Museum of Bosnia and Hercegovina, Stacion – Institute for Contemporary Arts in Prishtina and the Post-Conflict Research Center, Sarajevo, who were instrumental in the commissioning of the work.

We are very grateful to artist and undergraduate student in War Studies, Aryan Salazar-Volkmann, for designing a new logo for the project.  Ari was recently awarded an King’s Undergraduate Research Fellowship to work with us on the Art and Reconciliation project over the summer.

“My name is Aryan Salazar Volkmann, I am currently studying International Relations at King’s College London. I grew up in Guatemala, Vietnam, Iran, Colombia, New York and El Salvador. My interest in both Art and Human Rights began in Iran; a country rich in culture and history – yet sadly also plagued by human right violations. My relationship to Art was built on rebellion there; we had friends who were artists and musicians that used their craft as political tools to express their dissent of the situation of their country. Colombia, similarly, had its own battles to pick – at the time it was still in a state of civil war. I visited many exhibitions and worked alongside various artists – and again I noticed a trend in the community using art as a language of criticism, of community and of unity.  In New York I built on my experience in the development and justice sectors, whilst separately engaging in my own artwork. The two came together when I helped organise a painting exhibition orchestrated by ECPAT, aimed to raise funding for their cause. Nevertheless, El Salvador has been the first country in which I have witnessed art being harnessed as a legitimate tool within an institution I worked for: the World Food Program. It had launched a pilot project called ConectArte aimed at at-risk youth in areas of high violence.

It is only when I came to London however, that I began to see the possibility for an active academic commitment in between spheres dedicated to development, transitional justice, equity and reconciliation and the Arts. This is largely through my experiences with the Arts and Conflict Hub; and now, the Arts and Reconciliation collaborative project. I will be researching, transcribing data and documenting various cross-cultural country and institution-based case studies: my areas of focus are El Salvador, Guatemala, Turkey, Croatia and Vienna.”
You can read more about Ari’s inspiration for the design and her work on the project on her blog.

On 7 June 2017, Henry Redwood, an ESRC-funded PhD candidate in the War Studies Department at King’s College London and as a research associate on the AHRC-funded project, ‘Art & Reconciliation: Conflict, Culture and Community,’ screened the film After the Fact, at the invitation of LSE’s Conflict Research Group, based at the Department of Government, LSE.

The film is based on a chapter of Henry Redwood’s doctoral research on the International Criminal Tribunal for Rwanda (ICTR). It is a powerful attempt to present research in a new and thought-provoking way. His focus in this segment of his work how witnesses of war crimes encounter and experience international criminal justice, it means to witness an atrocity, the legitimacy of the current international criminal justice project. He argues that the process fails the witnesses, who often feel disappointed and betrayed by the entire process, as well as traumatised having to relive the abuse by retelling it.

During a discussion led by Dr Denisa Kostovicova, who is Associate Professor in Global Politics at the Department of Government, LSE, and co-investigator on the AHRC-funded project, ‘Art & Reconciliation: Conflict, Culture and Community,’ Henry Redwood elaborated on the value of art in the context of transitional justice, and the challenge of presenting academic research in an artistic form.

A lively discussion turned to questions not just about art and its role in opening a debate about difficult issues concerning the mass atrocity and violations of human rights, but also about the creative process. What is it like to translate the thesis into a film? One interesting point he made was that he felt that he had to elide lots of complexity — because of the time constraints and the medium. But, on the other hand, the medium – through sound, shots from the back, etc. also adds a different kind of subtlety and complexity. Also, Henry reflected on his work saying that his academic focus in on silences, and what is unsaid in the criminal trials — whereas he felt that through this creative process he himself was silenced as he could not express everything in such a short film — and in a way went through the same process as the witnesses he was studying. 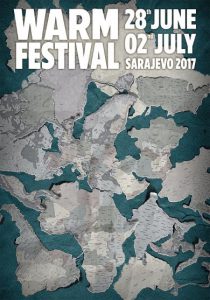